Daily Mile: We will be starting our new Daily Mile activity from Monday 28th January. Children across the school will take part for 15 minutes per day. Class 4 have mapped out the perimeter and have calculated a mile will be 22 laps of the playground. Children are not expected to run for all of it. They are competing against themselves to beat their score over a number of weeks/months. Studies have shown that the Daily Mile increases concentration in the classrooms, as well as general health and fitness. We ask children to make sure they bring their trainers into school to change into each day. There is no escape for the teachers, who will also be joining in!

Dodgeball Cluster Competition: This Monday 21st January saw two teams of Year 5 and 6 compete against 7 other schools in a very competitive afternoon at Churchill Academy. Both teams performed very well and showed great team spirit and sportsmanship throughout. We look forward to our next Cluster Competition!

Swimming lessons for Class 3 and 4 are taking place on Thursday afternoons during Term 3.

Friday 7th December gave a selection of class 4 a chance to show off their swimming skills at the North Somerset Swimming Gala. They all gave unbelievable efforts in their races, finishing either 1st, 2nd, 3rd or 4th in their heats. They were really well behaved, encouraged each other and were a pleasure to have as part of the team. A great time was had by all.

22nd & 24th October: We competed in our first Inter-House football competition for both EYFS/KS1 and KS2 (using our brand new goals!) and it was great to see everyone joining in, competing for House Points and the trophy. What was even better to see was the sporting behaviour towards others.

Some of our Year 4's were offered the experience of being introduced to some new sports, some of which we didn't even know existed! In a fun packed afternoon, the children had a go at different forms of badminton, laser shooting, fencing and cup stacking! The staff were very impressed with their motivation to improve from their previous scores and determination on the trickier challenges. Again, well done to all involved!

The Year 5 and 6's fielded two teams for the Cluster Football, which was held at Churchill Academy. It was great to see not only our footballers enjoy themselves, but other children who would not normally put themselves up for this sport. The children did the school proud by showing teamwork, commitment, sportsmanship and skill. The games were action packed at both ends and we demonstrated some great attacking play as well as being competitive at the back. Well done to all those who took part!

A team of eight Year 5 athletes (Ollie HB, Brett, Maisy, Millie, Isla, Isabelle, Max and Lucas) went to St Katherines School to take part in the first Laser Run competition ever in North Somerset. The children performed brilliantly as a team to win the event and come home with gold medals. They also had the opportunity to compete in a fencing tournament: Ollie HB and Millie took silver while Lucas won bronze. It was a fantastic afternoon of sport, thoroughly enjoyed by all. A Laser Run Club takes place on Mondays at St Katherines and any KS2 children are welcome to attend. Details available in school.

Blagdon's Year 3/4 team took part in the cluster tag-rugby tournament. The experienced players (Will S, Leo M and Ollie M) supported the novices in the team superbly well and a great time was had by all. The team was awarded the Fair Play award for their teamwork and attitude during the event. Well done all!

Multi-skills Festival, 22nd November 2017: Well done to Class 3 children who took part in the Multi-skills Festival at NSETC.  The children enjoyed participating in a range of sports, including laser shooting and fencing - Jack is a budding marksman!).  A brilliant time was had by all.  Thank you to Mrs Clements for coming along to help and Mrs Fennell. 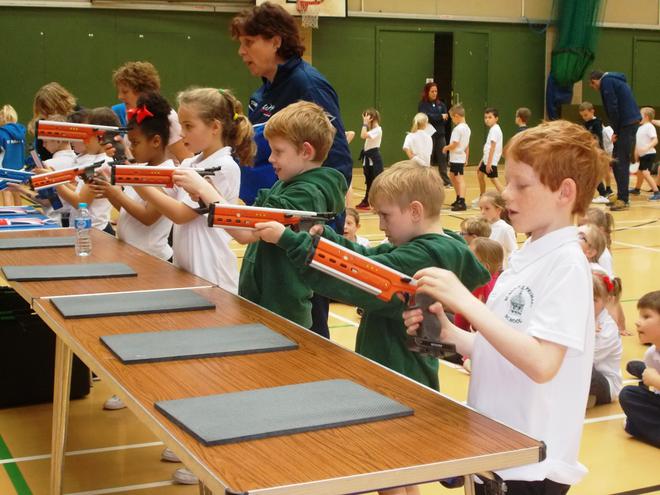 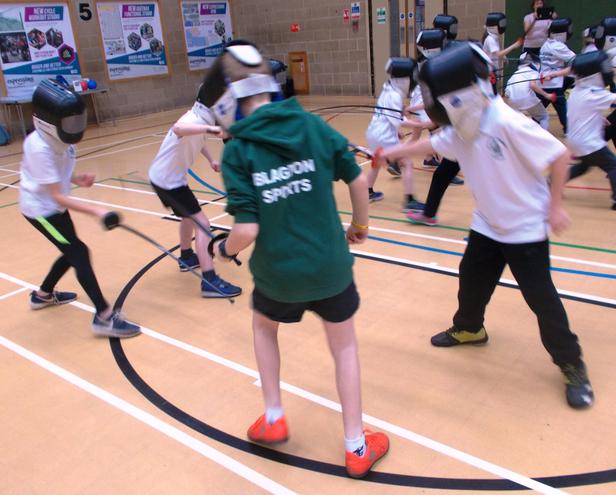 Football, 15th November 2017: Our football team competed in the North Somerset Primary Small Schools Football competition held at the Everyone Active Stadium in Clevedon. They worked really well together as a team and having won their pool A group, progressed to the winners pool. Once again they showed great teamwork and managed to secure a bronze medal. Well done. Above is a picture of the team sporting their new Team tops sponsored by Somerlap.

2nd October 2017: Our Yr 4/5/6 football team competed at the Cluster Festival, winning three out of their four matches. The children worked really well as a team: it was great to see their skills developing as the tournament went on. Our after-school football club is now taking place on Tuesdays from 3:00p.m. to 4:00p.m. There are still places available for children in KS2 who would like to get involved! 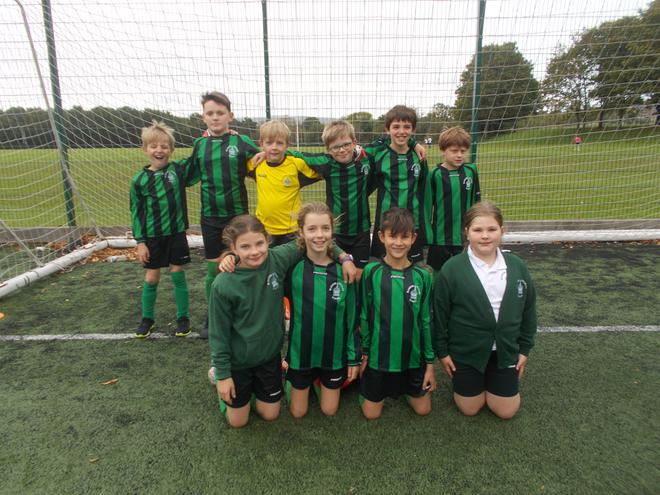 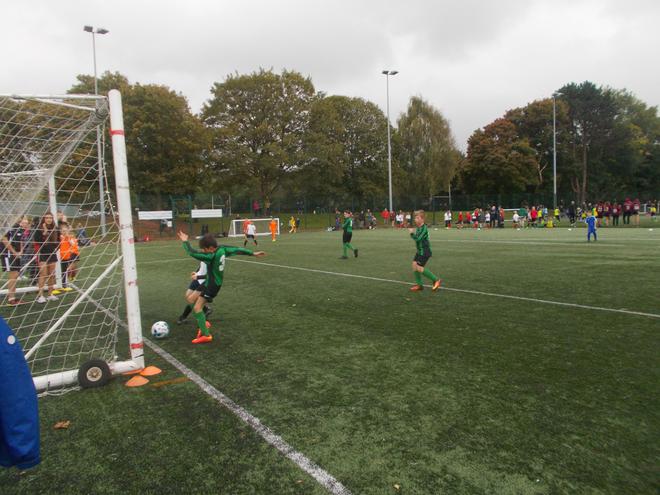 Forever Sport (Bristol Sport Foundation) has begun weekly visits to the school. The coaches are currently working with KS2 pupils in the morning to assess their physical literacy (part of the WE Love Sport programme) and offer support and advice to cater for the needs of children of all abilities in PE. In the afternoons, KS1 children are enjoying Tag Rugby sessions. The Monday after-school clubs are up and running and being greatly enjoyed.

18th September 2017: Blagdon is continuing its links with Churchill Academy and sport. Paul Mason (Head of PE) came into school for his first visit of the academic year and led a PE session on officiating games and matches. There were a number of children in Class 4 who proved to be budding referees!

30th June 2017:We are delighted to inform you that our school has been awarded a Gold School Games Mark. This is a fantastic achievement for our children. The local School Games Coordinator, Shane German, has commented that our children have stood out at recent festivals and tournaments with their skill, effort and dedication, whether they are KS1 or KS2. Well done everyone! A plaque will be arriving in September to celebrate this magnificent achievement by our school.

27th July 2017: Our Year 2 children went to Priory School to take part in a Multi-Skills event with twelve other primary schools. The event was extremely well organised and very enjoyable. Each activity was led, explained and demonstrated by Year 9 pupils and they did a superb job! All of the year 2 children participated in every activity with outstanding speed, accuracy and enthusiasm, giving 100%. On many of the activities they scored an impressive full marks! I was extremely proud of the children’s’ commitment, perseverance and attitude. At all times, their behaviour was exemplary and a real credit to our school.

22nd June 2017: Sports Day at Blagdon. The weather was kind to us and we had yet another fantastic sports day in the sunshine. The children competed with great spirit and effort, as did the mums, dads and toddlers in our spectator races. Our house champions for this year are East for the first time in many years. Well done all.

21st June 2017: Kwik Cricket. Our boys team played superbly well at the tournament on Wednesday, battling against the heat as well as the opposition. They finished in second place in the final, winning well-deserved silver medals and narrowly missing a place in the regional championships. Well done boys!

15th June 2017: Quad Kids. Arthur, Niamh, Ben, Polly, Chloe, William, Luke, Milly, Kaitlyn and Jaiden went to Priory School to participate in the sprint, 600m, standing long jump and javelin throw against 10 other schools. They were fantastic representatives of Blagdon School. Well done to all and a big thank you to Mrs Ford for helping on the day!

15th June 2017: Mendip Springs Golf Session. Class 3 had their first golf lesson with Will from Mendip Spring Golf Club and they thoroughly enjoyed it! They will be learning new skills and we will continue to use these in school PE lessons. There is no lesson next week due to sports day but we will then have a lesson every Thursday afternoon until the end of term. Happy golfing!

8th June 2017: Kwik Cricket. On Wednesday, the Year 5/6 girls took part in the Level 2 Kwik Cricket Tournament at Nailsea C.C. Despite being a novice team, the girls played brilliantly coming second (and winning silver medals!) in the plate final against Portishead. The match was very exciting with the final run totals equal, but Portishead winning on wickets. Well done, girls, for a fantastic achievement.