If you are worried about a child, young person or adult, who you think is being abused or neglected, CLICK HERE NOW TO REPORT IT.

Our school is dedicated to looking after all our children the best we possibly can. Safeguarding covers children’s physical, social and emotional well-being and runs alongside our work on Health and Safety and E-safety. We have a planned curriculum for safeguarding, which teaches your child how to keep themselves safe and what to do if any adult makes them feel unsafe.

Part of our responsibility in this area is to work with outside agencies such as Educational Welfare or Social Care to make sure all pupils are kept safe. This means that at times we are obliged to pass on concerns or information to these agencies. The school will always do this in consultation with parents unless to do so could put a child at risk

The Designated Safeguarding Lead at Blagdon Primary School is Mrs Jenny Campbell, our Headteacher.  As well as Mrs Jenny Campbell, Mrs Kerrie Burnell, and Miss Clare Pearson are our Deputy Safeguarding Officers.  If you need to speak with any of these members of staff and you are not sure how to contact them, please ask at the School Office.  Our Safeguarding Governor is Mrs Carol Marsh.  Mrs Campbell is also our Mental Health Lead and Young Carers point of contact. 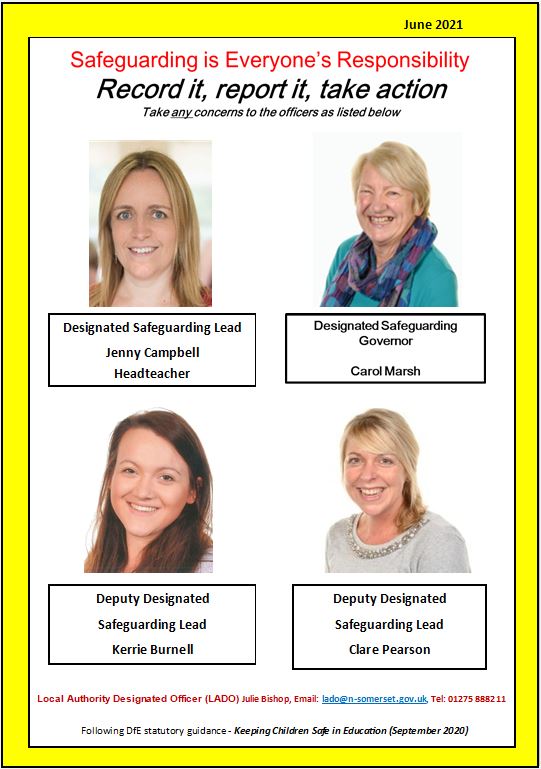 Any concerns about a child's welfare or wellbeing should be discussed with Mrs Campbell, Mrs Burnell or Miss Pearson immediately.

Please be aware, all visitors to Blagdon Primary School will be requested to leave their mobile phones in the secure lockers in the School Office.

Prevent is about safeguarding people and communities from the threat of terrorism. Prevent is 1 of the 4 elements of CONTEST, the Government’s counter-terrorism strategy. It aims to stop people becoming terrorists or supporting terrorism.

Incidents of extremism and radicalisation are rare and as such when they do occur, make the news. As with all safeguarding issues, it is important to be vigilant, and not complacent, but also not to panic.

What is extremism and radicalisation?

Prevent defines extremism as: “vocal or active opposition to fundamental British values, including democracy, the rule of law, individual liberty and mutual respect and tolerance of different faiths and beliefs. We also include in our definition of extremism calls for the death of members of our armed forces”.

Radicalisation is defined by the UK Government within this context as “the process by which a person comes to support terrorism and extremist ideologies associated with terrorist groups.”

We live in a wonderfully diverse world, with both differences and similarities to celebrate. Exploring religious and different social beliefs, in a peaceful and non-violent way, is part of growing up and should not be confused with something more sinister. The best way to PREVENT extremism and radicalisation is by open discussion and increased understanding of each other.

For more information about the Government’s Safeguarding Prevent Agenda, please look at the website launched by Nicky Morgan –  Educate against Hate This is a resource for school leaders, staff and parents.  It is designed to give advice on preventing extremism and helping to protect children and young people from radical views.

Female genital mutilation is the mutilation of the external female genitalia for non-medical reasons. It is often referred to as female circumcision, ‘cutting’ or ‘sunna’.

Female Genital Mutilation (FGM) is child abuse and an extremely harmful practice with devastating health consequences for girls and women. Some girls die from blood loss or infection as a direct result of the procedure. Some women who have undergone FGM are also likely to find it difficult to give birth and many also suffer from long-term psychological trauma.

If you are worried that this might happen to you or someone you know, you can speak to a member of the safeguarding team in school. They will be able to help and support you.

Alternatively, you can report this abuse by contacting one of the following:

If you or someone you know is at risk contact the NSPCC anonymously if you’re worried that a girl or young woman is at risk or is a victim of FGM.

Sexual exploitation can take many forms from the seemingly ‘consensual’ relationship where sex is exchanged for attention/affection, accommodation or gifts, to serious organised crime and child trafficking. What marks out exploitation is an imbalance of power within the relationship. The perpetrator always holds some kind of power over the victim, increasing the dependence of the victim as the exploitative relationship develops.

Sexual exploitation results in children and young people suffering harm, which can cause a significant damage to their physical and mental health. Whilst some children can be supported to make a recovery, others may suffer serious life-long impairments which may, on occasion, lead to their death.

Any child or young person can be a victim of sexual exploitation, but children are believed to be at greater risk of being sexually exploited if they:

However, there are many more ways that a child may be vulnerable to sexual exploitation and the signs that a child is being exploited are not easy to spot.

Signs of Grooming and Sexual Exploitation

Signs of child sexual exploitation include the child or young person:

If you have a concern about a child, please contact Mrs Campbell, the Designated Safeguarding Lead in school, as above.